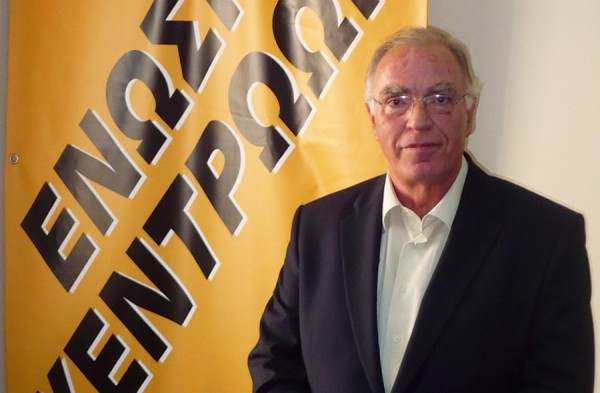 Last night (September 28), I decided to watch the entire interview of Vasilis Leventis. Vasilis Leventis is the new political leader who gained his entry to the greek parliament by being polled with 3.43% of the Greek voters. However, he is not a young politician. Leventis age 64 was first introduced to the public by his own local tv station back in the 90s’. It was the same time when he founded the political party “Union of Centrists”. Before that, he attempted many times to get elected as an MP with both major parties in Greece, PASOK, and New Democracy.

He is very well known for his tv shows, who will forget this epic show of his back in the 90s, when he thought that the police is heading to his station in order to close down the station. He was yelling and screaming, cursing the major political leaders (Papandreou and Mitsotakis). The next day he needed to apologize as the information about closing his station was false.

Last night he was on one of the most popular talk shows in Greece. Nickos Chatzinikolaou, the host of the show, is one of the most well-known journalists. He had many questions for Leventis, questions that I must admit that he answered them all. However, his answers need a lot of analyses.

For the first half hour of the show, Leventis was trying to explain why he included his son in the list of candidates while at the same time he accuse other political leaders of nepotism. He owned that to him for being beside him all those years. I guess the same thing can be pleaded by all other politicians for their sons and daughters.

After that, he started explaining some of his key points. A pensioner who receives more than 1000euros it will be forbidden for him to work. Because the pensioners are stealing the jobs from the young people! Maximum pension 1500euros for all, from the President till the last worker, this is because until 2017 there will be no money for pensions. He also wants to cut in half the wages for all members of the parliament and the government even for the Prime Minister. He also wants to lay off all of those who work in the Greek parliament and who got hired because of family ties with MPs.

Many of his key points are even harder from those of the new memorandum. However, he wouldn’t vote positively for the memorandum. He claimed that he could do a better job in the negotiations with the creditors. In the question what he will do if the creditors tell him a big no to his proposals, he answered the same thing that Tsipras was saying. The creditors will not say no to him because he is serious about reforms!

Last night’s interview had a lot of gossips about other political leaders, the troika, etc. However he never really answered how he will bring Greece back to growth. He said something about forcing all of those who moved their money outside of Greece to bring them back in. How he will force them and how this will help growth, he never really explained.

At the end of the conversation, we also learned that all of those measures have one goal. To keep Greece into the eurozone. Leventis believes that his reform program will be so efficient that the creditors will accept it and also they will accept and his demand for freezing the payments of the greek debt for 5 years with no interest at all.

I am sure that many of you might say that all those don’t really sound realistic. You are right, but again, what sounds realistic today in Greece? Greece is experiencing the results of the austerity not only in the economic level but in the social too. The deformation of the political environment is constant and it will not stop until Greece finds its way back to growth. After 5 years following the path of austerity many people are realizing that this doesn’t lead anywhere, and they are trying to find alternative solutions like for example Leventis.

I do believe that we have to wait. More deformation is coming very soon.