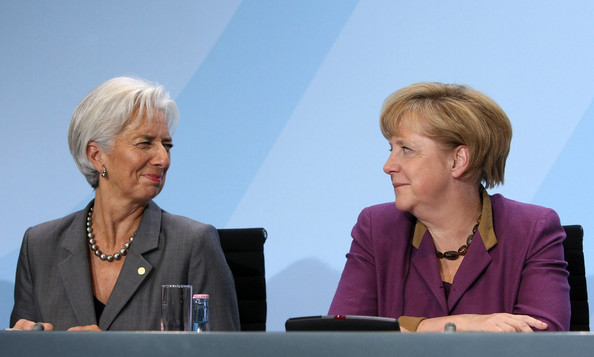 Last night (April 5, 2016), the German counselor Mrs. Angela Merkel met with the Director of IMF Mrs. Christine Lagarde after Wikileaks published the dialogue between top officials of IMF. In this dialogue between Poul Thomsen and Delia Velkouleskou, we can clearly see the two officials talking about an ‘event’ that can push Greece to accept IMF’s terms. This ‘event’ is a near default or a real default event.

After last night’s meeting, things are looking even more complexed. IMF position about the Greek debt includes a hair-cut. In fact, IMF had said in many tones that there can be no solution without a deep haircut.

On the other hand, the Germans are insisting that there can be no haircut in the Eurozone as this is illegal. However, the Germans want the IMF in the bailout program for Greece.

In the middle of this debate, it’s the Greek economy and the Greek citizens, who saw, after the implementation of the IMF-EU bailout program ,their lives and dreams being destroyed.

After 2010, Greece has lost 30% of its GDP, unemployment has skyrocketed reaching 25%. This is the official unemployment, if we search deeper into the numbers we will see that the real unemployment has reached more than 40%. At the same time, a great part of the Greek population has immigrated to other countries. Well, educated personnel has left the country for a better future abroad. Thousands of small businesses have closed and those remaining are searching for ways to immigrate to neighbor countries where taxation is much less.

However, after all, those austerity measures, the Greek debt is still unsustainable and it’s still growing.

Last night Mrs. Lagarde said that “We are clearly not where we want to be and particularly where Greece should be in order to be stable, in order to be prosperous, in order to respond to the Greek population’s needs.”

So after 6 years, where they would like to be? What had they in their minds for Greece which is so far away from today’s reality?

The answer is simple. If we visit Mr. Poul Thomsen blog, we will his ideas about Greece. We will see that Mr. Poul Thomsen doesn’t have any issue for a 300euro monthly pension in Greece. This is where they want to be.

However, they will never answer the question, how the Greeks can pay their taxes if they are getting only 300euros? how can the economy move ahead when the Greeks cannot consume?

Before almost 3 months, the due taxes had reached at the astronomical number of 82billions. Many analysts are predicting that until the end of the year this number will reach 100billions. This is the major proof of the spectacular failure of this program.

Last night Mrs. Lagarde and Mrs. Merkel decided to continue this madness. They want to continue their disagreement above the corpse of the Greek economy.

A madness without End.