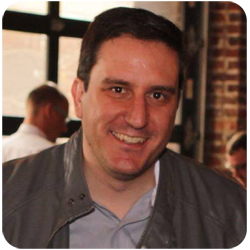 Peter Charitopoulos was born in Thessaloniki, Greece on April 21, 1976. His father was working as a banker, his mother was always in the house taking care of the family. He has two sisters, Cleto, and Konstantina.

From a very early age, he had a passion for computers. He got his first computer in 1985 when he was only 9 years old. It was a ZX Spectrum, very popular back then in Europe, with just 48kb of memory.

He started exercising in programming, but from the first moments, he loved the computer graphics.

Another passion of him was broadcasting. Peter consider himself very lucky as he lived the “spring” of free media in Greece. Until 1987, Greece had only two television station, which each one was broadcasting just for a couple of hours.

After 1987, the city of Thessaloniki started broadcasting in UHF frequencies, satellite programs. Peter was inspired by the new images and pictures he was receiving on his television, that made him want to work in the media field.

In 1989, he started working in a local radio station, his job was only to make sure that the music and the commercials were playing on time. That lasted only one month when he opened the microphone. At first, the manager’s reaction was to rush into the studio trying to stop him, but when he started listening he thought that he found a new talent.

After that, Peter moved from one station to another until he finds the one that could offer him the extra knowledge he was looking for.

In 1995, he studied Marketing and Advertising in the Pythagoras Institute in Thessaloniki, Greece. While he was studying he was working in the second biggest market in the Greek radio industry. He also did his first steps in tv broadcasting. He worked as an editor making the trailers for a local tv station of Thessaloniki.

In 1999, he became Program Director in a Top-40 radio station in Katerini, Greece, and after one year he became co-owner of Katerini’s Heat Fm 103.8. It was one of the most creative periods of his life, he was spending hours and hours in the on-air and the production studio. Inspired by the American radio stations he brought in Greece new ideas and a new philosophy for the Greek radio.

In 2005, he worked for a project of the European Union. It was a project which it was co-founded by the European Union and the Greek government. This was a big dive into Greek politics, as he experienced the corruption in the public sector. Even though he belonged to the conservative party from his early years as a teenager, this experience made him re-evaluate many things and he dissociates himself from political parties.

The Greek crisis found him married with two kids, he experienced the rapidly falling of the economy, but the one thing that made him leave the country was the feeling of hopeless. He really felt from the beginning of the crisis that this would last for many years.

Since 2011 Peter is working as a web-designer in New York City, at the same time he is very active in the social media expressing his ideas and thoughts about the Greek crisis.

He has appeared on radio and tv shows expressing his opinion for the Greek crisis, some of them were:

The Takeaway, with John Hockenberry, on WNYC.