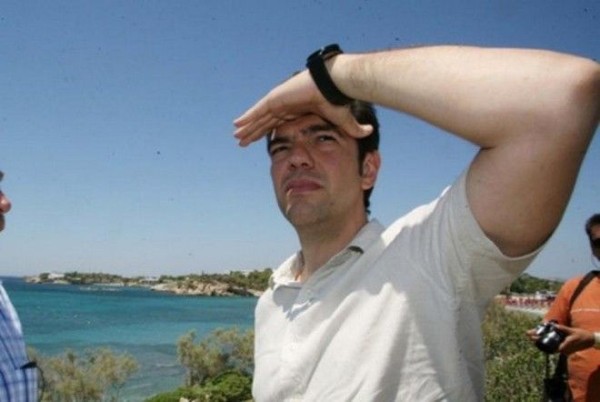 Even though we are at the end of the summer and very few of you might plan for vacations in Greece, I decided to start some lessons on the Greek language. The first phrase we will learn, is “Pera Vrehei”, in a free translation will be something like “It rains somewhere ahead” and Greeks are using it when they want to show that they don’t care. A good example can be the Greek government. After what happened in the last few months as also taking in consideration today’s political situation, the Greek government decided to close the parliament and go for vacations. They will return on October 1st. Yes, October 1st, close to the first evaluation from Troika, I can already imagine the picture; the sun burned Greek Ministers meeting the white as milk members of Troika.

Alexis Tsipras is degrading himself in a fast and aggressive way. After the u-turn in the negotiations, Tsipras has stopped addressing the nation; he doesn’t give any more interviews, as also he has stopped appearing to the public as he was doing before the u-turn by just walking down the street for a quick snack. However, he found the way to start his vacations away from publicity and in total secrecy. At the same time, hundreds of thousands of Greeks are trying to figure out how they will survive the winter.

Many believe that the new austerity measures will be the last nail in Greece’s coffin. Greece is heading for more recession, which means more business closing leading to more unemployment, thus more migration, more depression. The new austerity measures will give the final hit in the Greek economy, and this not something that only the pessimists Greeks believe. It’s also what you can hear from the most economists in the world. For the Greeks, there is also something else, the experience. The Greeks have experienced for the past 5 years how this program works and where it leads, this why more people everyday start seeing the other solution of exiting the eurozone as the one that might work.

P.S. Many are saying that Greece was saved by the Europeans, so now Greece can take the money from ECB and pay all those high pensions that any European will be jealous of. This is a myth, all the money that Greece will receive from ECB will go again back to ECB for paying the Greek bonds that ECB holds. In a more simple way, ECB is lending money to Greece so Greece can repay ECB. It might sound usury to you; well, it is what it is.